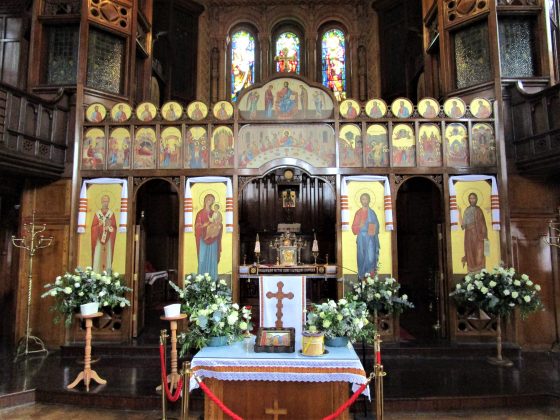 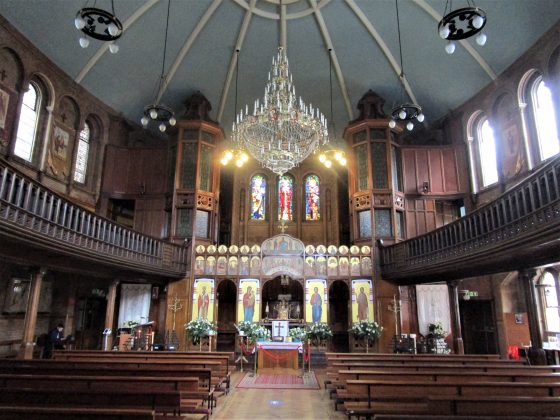 A trick question: how many Catholic cathedrals are there in London? The obvious answer might appear to be two (Westminster and Southwark), but the correct answer is three.

This neo-Romanesque church, once known as King’s Weigh House Chapel, was originally built for Congregational use, and took its name from a weigh house near the site of a predecessor meeting house in the City of London. In 1882 the congregation’s City premises were compulsorily purchased for the new Monument station on the Metropolitan and District lines and, after a peripatetic spell, the congregation joined forces with a small chapel in Robert (now Weighhouse) Street, on the Duke of Westminster’s Mayfair estate. The lease on the Robert Street site had expired in 1886, and the duke had offered a good-sized site nearby, sufficient for a larger chapel, a minister’s house and schools. The newly-merged congregations obtained designs from the Quaker architect, Alfred Waterhouse, who had rebuilt Eaton Hall in Cheshire for the Duke of Westminster (completed in 1883) and whose Natural History Museum in South Kensington (1873-81) bore some similarities to the new Mayfair chapel. This opened in 1891; it seated 900 and cost £30,000.

Following wartime bomb damage (when the minister’s wife was killed), King’s Weigh House Chapel was restored in 1953. However, the congregation declined in the post-war years, and in 1967 the chapel was sold to the Ukrainian Catholics, who are in communion with the Holy See. The building became the cathedral church of a local apostolic exarchate, created by Pope Pius XII in 1957 (and raised to the rank of an eparchy, or full bishopric, by Pope Benedict XVI in 2013).

The cathedral and its associated buildings occupy a tight corner site, and ‘display Waterhouse’s characteristic architectural virtues: stringency, clarity and mastery of plan’ (Survey of London). The style might be described as free Romanesque, the southwest tower being loosely modelled on those of St Etienne, Caen. Outside it is faced in Waterhouse’s favoured materials of hard red brick and buff terracotta faience. The round-arched theme continues inside, where the dark, well-timbered oval space has a horseshoe gallery on three sides, supported on timber columns augmented further back with four structural columns clad in faience tiles. The gallery originally extended across the east end and housed an organ loft; this was removed in 1903, when a chancel was formed by J. J. Burnet, his work seamlessly in keeping with Waterhouse’s (with stained glass by R. Anning Bell). Above the auditorium is a ribbed dome, restored after bomb damage (and again after a collapse in 2007), from which a large central chandelier hangs. Other furnishings include a Bentley/Marshall confessional on loan from Westminster Cathedral, but the most striking feature is the iconostasis, with tiered figures of painted saints on gilded backgrounds, created by Juvenalij Mokrytsky, a Ukrainian monk.

The cathedral is normally kept locked, but is currently open during the day for all to enter and pray for a just and peaceful settlement in Ukraine.

For more information, please visit the cathedral website or the online Survey of London.