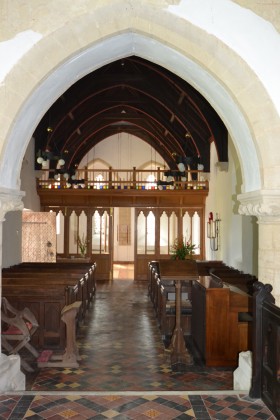 St Thomas sits on a hill raised high above the road that runs through the middle of the very small village of Elsfield with a population of about 100.

The chancel and nave of this listed grade II* church date from, at least, the latter part of the twelfth century. There was also a north aisle that may also have dated from this period, but which was later demolished. In about 1273, the church was remodelled and rededicated to St Thomas of Canterbury. In 1849 the church was heavily restored in an Early English style. The floor and seating were renewed in 1859 under the direction of G E Street.
In 2002, the west end was cleared of pews to create space for the Village Room, which is separated from the nave by an especially designed folding oak and glass screen. The toilet, kitchen and a storage area were housed in an extension leading off from the Village Room on the north side, where much of the earlier north aisle had been.
I especially like this church partly because of the feeling of peace that the simple interior creates, but also because the Village Room, created at the west end, is such a beautiful, well-designed and well-executed space.
The rest of the nave and chancel remained unchanged and as it is a small church they still use the high altar.

The main building remains the responsibility of the PCC, but the village room is managed by a committee made up of church members and non-churchgoing residents.

This project has achieved the two objectives of retaining the historic fabric and the calming feel of the building, while creating an inspiring community space which hopefully will help to sustain the church for years to come. As the church notice-board facing the road now proudly states this building is now the ‘Church of St Thomas of Canterbury and Elsfield Village Room’.