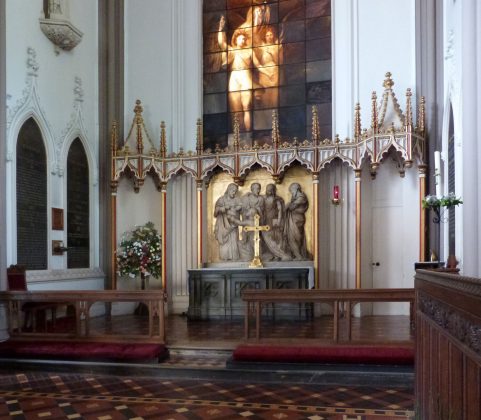 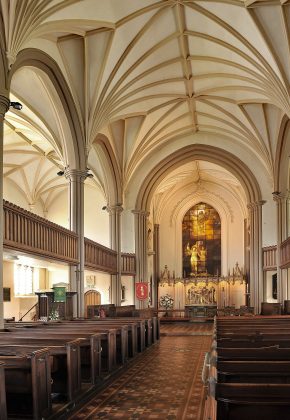 Having just completed the first comprehensive study of England’s late-Georgian churches, I have visited a huge number of them. If I were to be sent off to spend the rest of my days on a desert island with my notes and images of just one of them as a reminder, the chosen example would be St Thomas, Dudley.

St Thomas is an unquestionably fine church, but it also represents so many of the issues that formed an essential part of the church building process in this period: questions of style; planning options; how best to accommodate the period’s auditory worship so that all could hear and see; the building process; funding; notions of tradition; the threat from Nonconformity; and the use of new materials.

By the early nineteenth century, the medieval St Thomas was deemed in poor condition and too small for a town expanding rapidly on the back of industrialisation. Nonconformity was thriving as a result. More accommodation was certainly needed, but there was opposition to the new church from antiquarian-minded parishioners who regretted the loss of the old building, as well as from those who resented having to pay for the new one via church rates. Quite how London architect William Brooks secured the commission is not clear: he was a ‘zealous Nonconformist’ with no known previous experience of church building. And as an accomplished Classicist, no doubt he was keen to design Dudley’s church in that style. However, in 1814 he noted the local wish for a Gothic design and later that year supplied both Classical and Gothic alternatives; the latter was selected. The church was erected 1815-19.

It is a remarkable design, an elongated octagon in plan with shallow lateral projections on the two long sides, ‘a combination of longitudinal and centralised planning’ according to Andy Foster. Brooks’ initial design was dominated by the belief that all needed to hear and see the minister during auditory worship and to this end he specified galleries on all four sides, focused on the centrally placed pulpit; Viscount Dudley, the patron, insisted on a more traditional chancel. Nevertheless, the design completed in 1819 ensured no worshippers were too far from the pulpit and had sight of the altar.

The building process is also of interest. Neither Brooks nor his clerk of works attended regularly and the builders, it seems, were largely left to get on with the project. Despite Brooks’ initial estimate of £10,000, the eventual cost was £24,000, a substantial sum for this period. There were numerous disputes, eventually settled by arbitration. Also notable is the extensive use of novel materials, especially iron from local foundries. The nave columns are of cast iron with attached shafts. Cast iron was also specified for the window tracery and even the Commandment and Creed ‘boards’ are in this material. The elaborate reredos also incorporates much cast-iron decoration. Most remarkably, massive cast-iron trusses are used in the roof, placed adjacent to conventional wooden ones, as the contractor ‘could not warrant the work standing’ without them.

In addition to its historical interest, both inside and out, it is an impressive church. The walls are of Tixall ashlar with decoration loosely based on Perpendicular precedents. The elegant spire is 175 feet tall. Unusually, there is a clerestory, but without windows, a strange conceit.

The once magnificent interior was reordered in 2019 when ground-floor pews were removed and various rooms created under the galleries, but much of the original dignity remains with the galleries providing a degree of intimacy. (The photographs associated with this entry were taken in 2015.) The slender columns rise to support the tierceron vaults of plaster, strengthened by yet more iron.

The east window is important: ‘The Transfiguration’ painted on glass by Joseph Backler, 1821. Below, set in the reredos, is ‘St Thomas recognising the Risen Lord’ by Samuel Joseph. The west gallery is entirely filled by the majestic organ case. Also significant is the stone altar, something both unusual and illegal in the late-Georgian period.

Brooks’ design was never likely to have enthused the Ecclesiologists, but for 21st century church-crawlers with more inclusive sensibilities, it is a memorable building. Sir John Betjeman might well have had it in mind as one of the ‘fine churches of unfashionable date’.