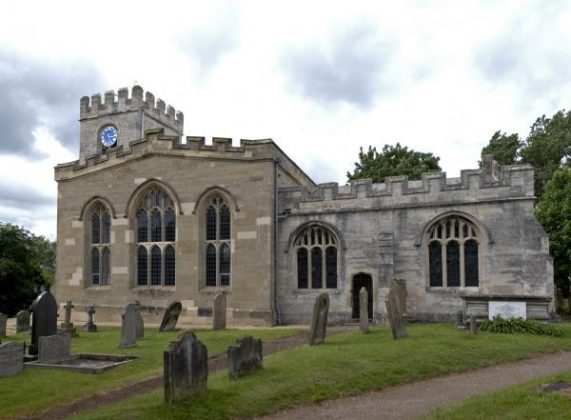 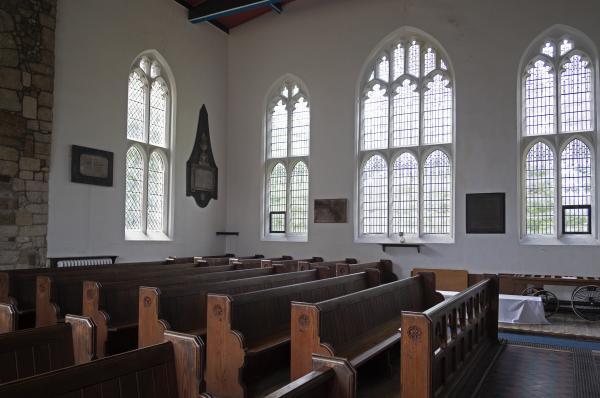 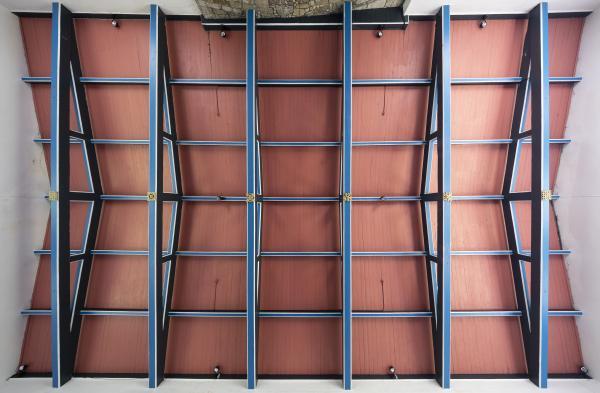 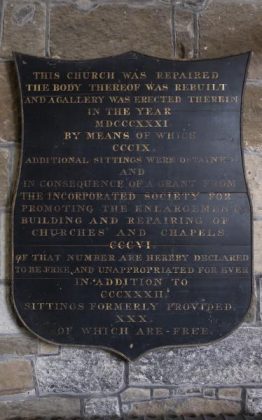 The existing fifteenth century church, was modified and extended by James Pigott Pritchett (1789-1868) between 1826 and 1832. The building underwent further restoration in 1878.

The new nave, designed by Pritchett, powerfully dominates the extant building. It is built using ashlar blocks of a creamy stone contrasting with that of the medieval fabric and appears disproportionate in its dimensions compared to the medieval tower and 15th-century chancel, both of which underwent only minor alteration during this campaign. The chancel was already capacious with chantry chapels to north and south. A Latin inscription on the external chancel wall commemorates Ralph Neville, founder of the church in the fifteenth century.

Pritchett’s objective was to provide an increase in space and seating capacity. Notes made on his drawings, corroborated by the surviving commemorative tablet (see image), suggest his brief was to almost double seating capacity – 309 were added to the existing complement of 332 (303 of the new sittings being free and unappropriated as stipulated by the Incorporated Church Building Society. Initial proposals, documented in Lambeth Palace Library ICBS932, show the original plan was for the simple addition of a south aisle to achieve the increase in space with the allusion in his notes to encouraging the return of those who were now attending the Methodist meetings rather than the services of the established church.

The church was re-opened in 1832 and a report in the Yorkshire Gazette on 21st April that year was highly complimentary of Pritchett’s work, praising its ‘pleasing and picturesque appearance and celebrating the installation of a hot-air heating system’. That Pritchett’s new nave, broader than it is long, was well received by the local press upon its completion in 1832, goes some way to demonstrate what had become a very different understanding of the architectural setting of the Anglican church in the late Georgian period, preceding the great upheavals of the Ecclesiologists in the 1830-40s.

Many Anglican church buildings across the country underwent substantial phases of reordering and alteration in the later Georgian period, when attitudes towards the architecture of church buildings was predominantly aimed at seating the greatest number of persons to hear the voice of the reader and the preacher.

Pritchett’s own attitude towards the architecture of church buildings may have been driven by several factors; chiefly, the demand for work across all denominations at the time to accommodate larger numbers of congregants in their buildings, where space was at a premium. Notwithstanding his own field of practical experience and exposure; Pritchett being a Congregationalist, raised in an Anglican clerical household, to then having worked collaboratively with Charles Watson on several projects to design new chapels for different denominational clients in Yorkshire. Pritchett will have had first-hand experience with the struggles of his day, and the relationship between faith groups.

Pritchett’s design for a new nave at St Peter must demonstrate above all else a bold design to meet the demand of his client, who was evidently content to support what is a dramatic loss to the character of the medieval building. Pritchett’s interior is utilitarian and auditory, not dissimilar to a meeting hall. The ceiling is low pitch and boarded for acoustic effect. The gothic fenestration is little more than a reminiscence, rather than a nod to medieval precedent; the design is repeated in broadly the same way at St Mary, Greasbrough, also by Pritchett and Watson, completed in 1828 whilst work at Brafferton was ongoing, again at St Peter, Huddersfield and much of his work in the York Minster precinct when employed by the Dean and Chapter. Pritchett’s nave as completed at St Peter, Brafferton is absent of buttresses, despite both of his design drawings for the Incorporated Church Building Society, now in the Lambeth Palace Library archive, clearly showing buttresses at the function of each four walls; an absence which accentuates the appearance of a meeting hall, without historic precedent in this context.

We know that Pritchett’s nave included a full sweep of north-facing pews, facing a three-decker pulpit situated in front of the central window of the north wall. It was also at this time that a new entrance to the church was made in the south face of the medieval tower. Access to the first floor gallery in the south half of the nave was via a spiral staircase in the medieval tower, all of which were removed and disposed of c.1878. The interior arrangement of Pritchett’s nave would survive no more than 50 years before the church was re-ordered in the latter half of the nineteenth century.

In 1863, St. Peter’s was visited by Sir Stephen Glynne who opined:

This church presents now but an unsightly appearance, with an ugly, sprawling, modern Gothic nave, rebuilt 1826, a chancel, with north and south chapels, and a low west tower, nearly lost in the ugly aspiring roof of the nave. The nave has been extended in the new building, for increased accommodation, but nothing can be uglier without or within.