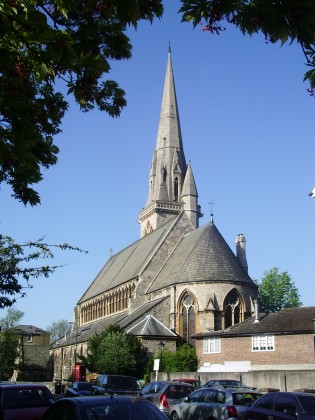 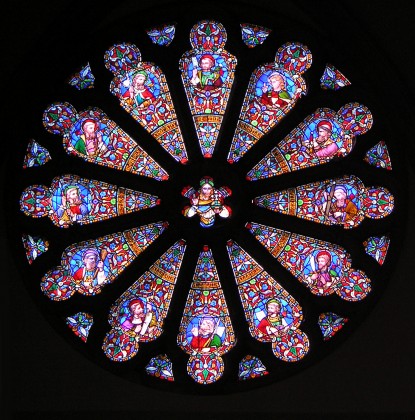 The Church of St Matthias was built in 1857-1858 as a chapel-of-ease to the Parish Church of St Mary Magdalene to serve the growing community on Richmond Hill. The distinctive 194-feet high tower and spire – a landmark visible from miles around – were completed by 1862.

Faced in Kentish Ragstone and Bath Stone, the church is a fine example of the work of George Gilbert Scott. Its design draws upon both English and Northern French traditions of the 13th century. An appreciative review of Scott’s new church was published in the 7th August, 1858 issue of The Builder, however a very much more critical review was published in Volume XIX of The Ecclesiologist.

Externally, the only significant changes to Scott’s original design comprise the additions of a ‘south-west’ porch and choir-vestry by John Oldrid Scott in 1870 and 1884 respectively, and the addition of the All Saints’ Chapel and a clergy-vestry and sacristy by Cecil Hare in 1915-1916. Major works of stonework repair and restoration to the tower and spire and the ‘west’ front were undertaken under the direction of the Parish Architect, Peter Bowyer, in 1988-1989 and 2014, respectively.

Scott’s originally cold and austere interior has been enhanced over the years by the introduction of fine stained-glass by William Wailes in the great wheel-window at the ‘west’ end of the church and in the three windows in the apse; by Lavers, Westlake and Barraud, and John Hardman in the windows in the north and south aisles; and by Burlison and Grylls in the windows of the All Saints’ Chapel.

The interior has been further enhanced by the introduction of an oak chancel-screen and oak organ-case designed by Arthur Blomfield in 1897 and 1899 respectively; by the introduction of panelled and boarded linings to the originally open roofs of the aisles and of a boarded lining to the originally open roof of the nave in the early years of the 20th century (modestly coloured in 1958); by the introduction in 1908-1909 by Cecil Hare of a boarded and richly decorated lining to the originally open roof of the chancel (re-painted with additional gilding in 1992); and by the installation of a richly decorated ceiling to the apse of the All Saints’ Chapel and an elegant, oak screen by Hare in 1915-1916. The works carried out under the direction of Hare in 1908-1909 also included the re-paving of the choir and sanctuary in Tinos and Pentelikon marbles and the introduction of a richly carved and gilded, oak altar and panelling in the sanctuary. The finely carved, oak pulpit in the nave, designed by Cecil Hare, was added in 1916-1917 and the present oak stalls and desks and panelling in the choir designed by Oswald Pearce were added in 1934.

Major works of alteration to nave and aisles to enable the church to serve a broader range of community uses designed by Hutchison, Locke and Monk were undertaken in 1977-1978, using the backs of Scott’s bench-pews as wall-panelling. The ‘eastern’ end of the nave and aisles were repaved and the interior re-lit in 2009 under the direction of the Parish Architect, Peter Bowyer.