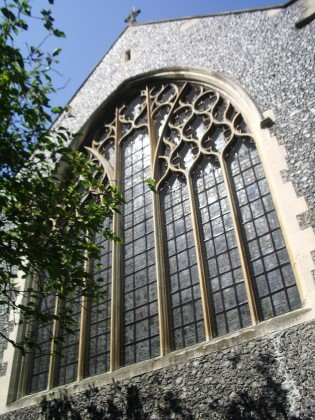 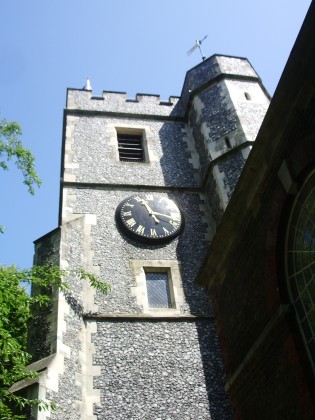 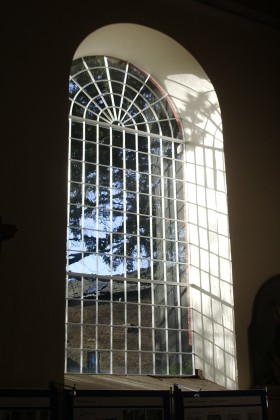 The Church of St Mary Magdalene – Richmond’s historic parish church – occupies a site at the heart of the town used for Christian worship and prayer for some eight hundred years.

Nothing of the original or mediaeval church remains above ground level except for the early-16thcentury, west-end tower – extended upwards during the 17th. and 18th centuries and further altered by its complete re-facing in knapped Kentish Flint in the early-20th century.

The present, classically-detailed, five-bay, brick-faced, south aisle and the elegantly proportioned Tuscan colonnades of the nave are the only remaining parts of the major scheme of reconstruction undertaken ca 1750.

The distinctly, Georgian, classical character of the interior of the church was substantially neutralised by the major works carried out in 1865-1866 under the direction of Arthur Blomfield. These included the stripping-out of the Georgian box-pews in the nave, aisles and chancel, and their replacement with entirely uniform, varnished, pitch-pine bench-pews; the re-roofing of the nave and north aisle and the removal of the flat, plastered and corniced ceilings below; the removal of the late-17th century, north porch; the rebuilding the greater part of the north aisle and its eastward extension; the removal of the elegant Georgian galleries; the construction of north-west and south-west porches; the re-location of the organ; and the removal of the original, fine-grained, clear, leaded glazing in the aisle windows and its replacement with obscured glazing set in heavily detailed, ironwork frames.

Major works at the eastern end of the church were undertaken in 1904 under the direction of G.F. Bodley. These comprised a new and significantly larger chancel in place of the much altered Tudor chancel, vestries and organ-chamber, chancel-aisle – the present All Souls’ Chapel – and a chapel – the present All Saints’ Chapel. Bodley’s works also included the removal of Blomfield’s heavily-detailed north and south galleries, and the demolition of his eastern extension of the north aisle.

Whilst the windows of the chancel, chancel-aisle and chapel were glazed with very fine stained-glass by Burlison and Gryll’s, and the floors partly paved in Bodley’s characteristic black-and-white, chequered marble, due to limited funds, the new chancel, chancel-aisle and chapel were never completed with richly detailed fittings and furnishings. Instead, the plain, ashlar stonework has been left entirely bare, relieved only by an oak chancel-screen added by Cecil Hare in 1905; choir-stalls, desks and panelling of by Charles Nicholson in 1921; and very fine communion-rails by Randoll Blacking in 1932.

Recent works include the re-glazing of the aisle windows in clear, mouth-blown glass under the direction of the Parish Architect, Peter Bowyer.

The outstanding collection of 17th, 18th and 19th century monuments that line the walls of the north and south aisles and the south-west porch, which include works by the renowned sculptor, John Flaxman, together with the ledger-stones and the elegant, carved and inlaid timber pulpit of 1699, have survived the extensive changes of 1865-1866 and 1904, but have been shifted from their original locations. Other features of interest within the church include the elegant marble font of 1843, removed from the church in 1867 and only reinstated in 1961, Charles Nicholson’s Great War Memorial, west porch panelling and Mayor’s Pew of 1925, and Oswald Pearce’s restored Tudor arch and balcony balustrade of 1935 at the west end of the nave.