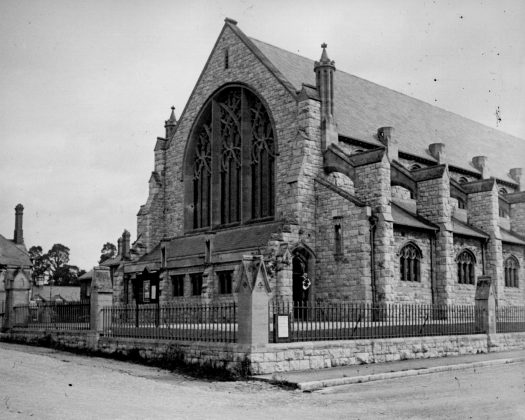 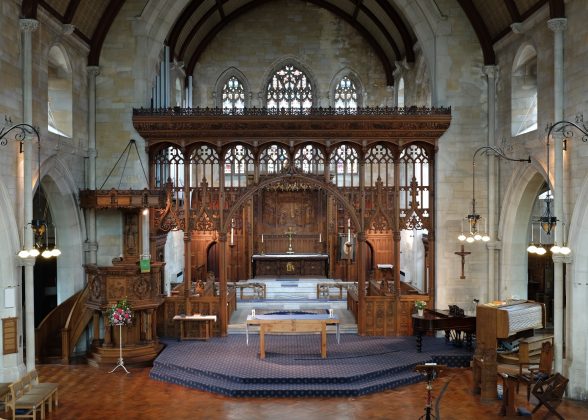 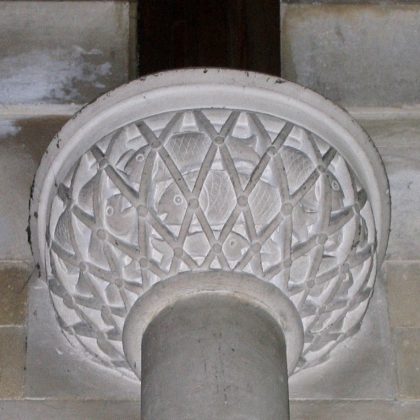 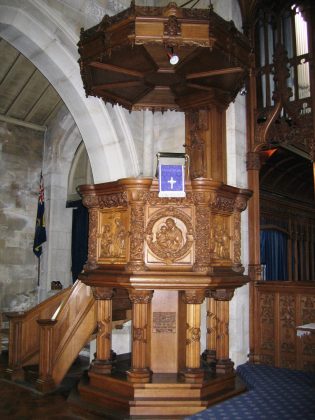 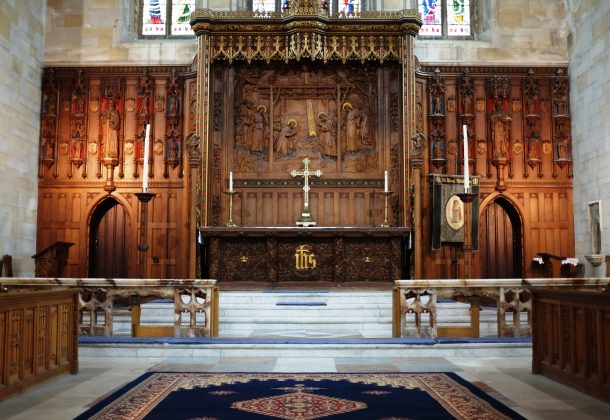 In July 1903 the first public announcement appeared that a new church was being contemplated to replace the small and ancient St Mary’s in the parish of Highweek, Newton Abbot, Devon. It was a popular decision and donations poured in, with £5,000 of the £8,000 initially required being raised within a few months and a plot secured in the Abbotsbury area. A competition was held to decide on the architect and in March 1904 it was announced that Edmund H. Sedding of Plymouth had won. The new church of St Mary was consecrated and opened by the Lord Bishop of Exeter in June 1906, less than three years after the initial announcement.

This was the second Devon church designed by E.H. Sedding, the first being St Peter’s, a stone’s-throw away in Shaldon. Both churches feature proportionately large west windows, a clerestorey and flying buttresses (Fig. 1), characteristics ‘borrowed’ by the architect from his uncle, the celebrated Arts & Crafts proponent and strong Anglo-Catholic John Dando Sedding, with whom Edmund trained.

The interior, however, Edmund made his own, with its smooth pale-coloured stone-faced walls, panelled barrel-vaulted ceiling and almost octagonal piers (Fig. 2). Stone carving is limited to bosses and corbels (Fig. 3) imaginatively designed. Metal work, too, is rather sparse but effectively used in four-light wrought iron chandeliers hung below the clerestorey windows, and in a brass and bronze eagle lectern. The glory of the church is in the remainder of the furnishings, elaborately carved in wood and with all but a few later pieces by the renowned Devon company run by Violet Pinwill in Plymouth.

After the death of his uncle in 1891, Edmund Sedding had set up practice in Plymouth, working alongside the woodcarving business of Rashleigh, Pinwill & Co. This unusual company was run by three sisters, Mary, Ethel and Violet Pinwill, who had learnt to carve during the time their home church in Ermington, Devon, was being restored. Sedding championed the Pinwills and designed many of their early pieces. By the time he was working on designs for the furnishing of St Mary Abbotsbury, Violet was the sole proprietor, and she continued to run a highly successfully business for over 50 years. It was this close working relationship that engendered a synthesis between design and execution that must have been the envy of many architects.

While some features were removed from the old St Mary’s to the new, including the mid fifteenth-century central east window, piscina and pulpit, it was intended from the beginning that new furnishings would be provided. The plans for these were produced by Sedding but it took a considerable length of time for the funding to be raised. It was 1912 before the first Sedding-designed furniture was commissioned from Violet Pinwill. This was an ornately carved pulpit with sweeping staircase and matching crested sound board (Fig. 4).

Sedding’s plans for the rest of the furnishings were then put on hold by a further lack of funding. Meanwhile, his own life was taking a turn for the worse with failing eyesight and then blindness robbing him of the capacity for independent work and forcing him to take on a partner, Reginald F. Wheatly. When Sedding died in 1921, the rest of the furnishings had still not been commissioned. After funds were eventually forthcoming, it was Wheatly who translated Sedding’s plans into reality.

The furnishing of St Mary’s was restarted by a large legacy in November 1922. Work advanced rapidly after this point, with the majority of the furnishings we see today installed within three years of the bequest, aided by further donations. The chancel screen, though dominant by its sheer size at 23 ft (7 m) high, is exceptional in that the central arch spans four of the eight bays, providing an unusually open view to the chancel beyond. It is otherwise traditional in style, though embellished here and there by decidedly Art Nouveau flower detail.

The remarkable altar, with its rich carvings and in a darker coloured wood than the rest of the furnishings, was next. Screens were added to the north and the south of the chancel, then choir and clergy stalls, with semi-kneeling angels, a characteristic of Sedding design, gracing the bench ends. The chancel is further enhanced with riddel posts topped with semi-kneeling angels and tall candleholders, while all the altar furnishings in the Lady Chapel are also from this period.

The reredos (Fig. 5) is perhaps the most striking feature in the church, given that it occupies the full width of the east wall and contains a complexity of detailed carving. It consists of a central panel in deep relief depicting the nativity, set within an elaborate canopy. On either side are the figures of 18 saints set within niches with canopies over. The church is flooded with light, largely from the huge west window filled with clear glass, interest being added by the pattern of lead work. There is some later stained glass, as well as the central east window from the previous church of St Mary.

Although the interior at Abbotsbury cannot be said to be the ultimate synthesis of Sedding design and Pinwill execution (that crown belongs to Crantock church in Cornwall), there is still a real sense of spectacle and cohesion between fabric and furnishings that is rarely found elsewhere. There is currently (2018) a question mark over the future of St Mary’s and options need to be considered. It is hoped, however, that a sustainable future can be found for the building that ensures the preservation of this unique and complete ensemble.

This article is based on part of the following paper: