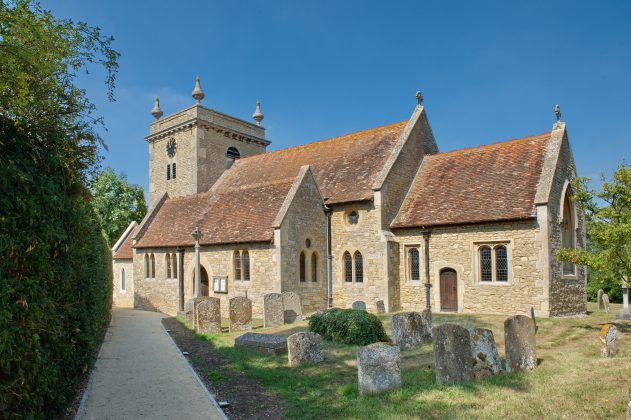 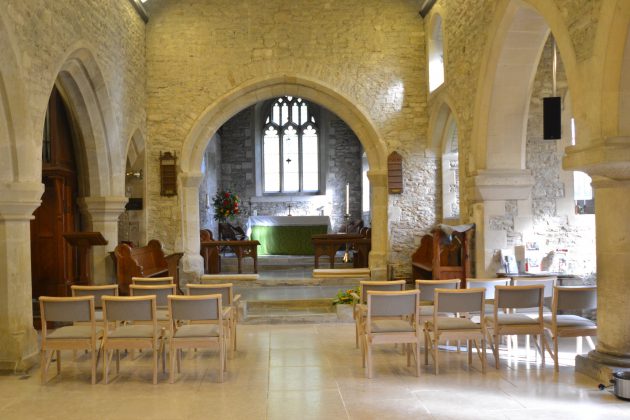 St John the Baptist, Stadhampton
Stadhampton is a village of about 800 people five miles north of Wallingford, South Oxfordshire. There has been a church on the site since the twelfth century, but the present building dates largely from 1588. The tower was restored in 1737 by Richard Belcher described as a mason. It was restored and enlarged by E. G Bruton in 1875. Made up of a chancel, an aisled nave and west tower. An extension was added in 2013 to house toilets and a new boiler (see below). Built of limestone rubble and ashlar dressings with plain-tiled roofs.

A joint project between the Parish Council, St John the Baptist’s PCC and the Stadhampton community resulted in the creation of Stadhampton’s Village Hall at St John’s in October 2013.

This is a church I have visited several times over the last few years. It is an inspiring example of where a congregation and the local community are now not only sharing the use of the building, but are also sharing the responsibility of looking after and managing it.

The village needed space for community events and the PCC wanted to broaden church activities and outreach. In 2008, St John’s had a very small congregation and the church building was in need of major repairs as well as being cold and damp and having no mains drainage. It was standing empty six days a week. Initially the village Building Project Team intended to build a new hall, but gradually an idea formed which was tested through consultation and public meetings that by creating a community space within St John’s, two problems would be solved.

Between 2008 and 2013, at a cost of £380,000, the church was reordered to provide new comfortable and flexible seating, underfloor heating and a new lighting system. A small extension was added to the west end to house the boiler and fully accessible toilets. A fully equipped kitchen was built in the north aisle. A new audio system was installed and a digital projector, screen and DVD player are available for use. The interior was also restored and cleaned and it is now a warm, comfortable and flexible space, but, in my view, retains a very special feeling and one that is still very much a church.

There is a service every Sunday. In addition, it is now available for hire from Monday to Saturday and on Sunday afternoons. It has become a popular venue with a booking calendar on the village website. Currently regular events include a book club, parent and toddler club, pilates classes, a ukulele group and a cinema night.

The church building is now managed by a sub-committee of the PCC which works to balance the interests of both the secular community and the church. At the time of writing, key roles on the management committee include a Churchwarden, a Parish Councillor and the Booking Clerk; the rest of the committee (of eight) is made up of people largely involved in the halls user groups and the Vicar has an open invitation to attend any meetings. The management committee is guided by a document defining roles and responsibilities. These include: how running costs are shared; fundraising and apportionment of any profits and the maintenance of the fabric of the building, etc.
On a recent visit, I was told that within the village, some people call it ‘the church’ and some call it ‘the hall’. This can only illustrate that it is functioning as a truly shared space and is managing to fulfil the roles of church and village hall perfectly.
http://www.stadhampton.org/village/village-hall-at-st-john-s