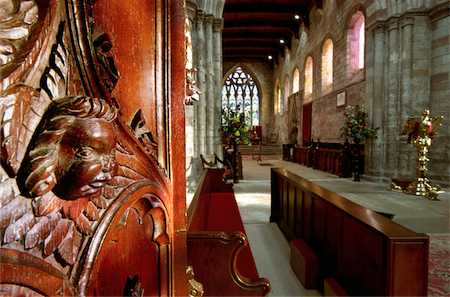 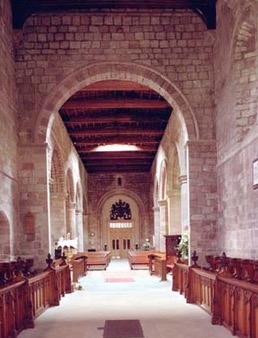 The first stone church in Norham was founded in A.D. 830. The site of this church is probably to the east of the present church where there is now a clump of large yew trees in the churchyard. The coffin of St Cuthbert was brought from Lindisfarne to Norham in A.D. 875 when Danish invaders were threatening the monastery (they burnt it shortly afterwards). The present building was begun in 1165 and was built at the same time as Norham castle. Sections of the original building which remain include elements of the chancel except the sanctuary; the arches on the south side of the nave and the wall above them, three pillar bases on the north side of the nave, and the foundations of the side walls. It was in Norham church in 1292 that John Balliol did homage to King Edward I of England for the kingdom of Scotland. In 1320 Robert Bruce occupied and fortified Norham church while besieging the castle. The east end of the church was damaged during this occupation. St Cuthbert’s Church is said to have been roofless for a hundred years. This period was probably from 1513 (Battle of Flodden Field) to 1619 when the parishioners restored the church. They demolished the aisles and built a wall to replace what was left of the north arcade. The south aisle was rebuilt in 1846, the north aisle in 1852. Originally the nave was longer than its present five arches. A water-colour of 1835 shows six arches and part of a seventh. The present tower, built in 1837, occupies most of the space of the sixth arch.

The fine chancel arch has alternate red and white stones. This feature is repeated in the arch over the vestry door and is also found at Holy Island. The pulpit and the Vicar’s stall are 17th century work and were made in the Restoration period under the direction of Bishop Cosin; the Vicar’s stall is described in one plan as Bishop Cosin’s desk and has on it the arms of the See of Durham.

There is a clock in the tower which faces on the east and west sides. It was given to mark the jubilee of Queen Victoria in 1887 and strikes hourly. It was made by a well-known Northumbrian clock maker, Charles Taylor. Beside the clock bell hangs one other bell which is tolled for Sunday services, made in 1670. The outstanding feature of the outside of the church is the rich Norman carving over five of the windows on the south side of the chancel. For eight hundred years the church has stood between the village and the Tweed.