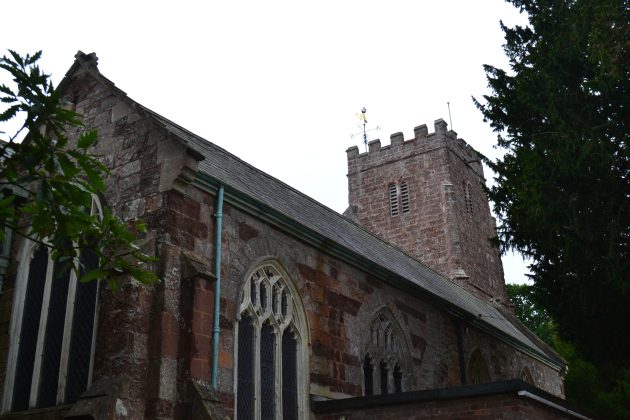 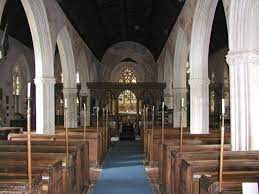 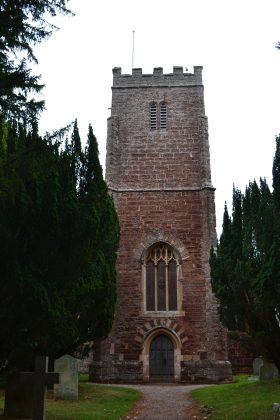 The patron of the living, the 11th Earl of Devon, joined the Ecclesiological Society in 1842 (when he was Lord Courtenay) and he was responsible for commissioning Joseph William Rowell (1828-1902), a young architect in Newton Abbot, (and surveyor to the Devon Estates) to undertake the mid nineteenth century remodelling of the church, notably the wagon roof of 1857-8 and the extension of the chancel in 1861 including the three-light east window of in Decorated style.

Powderham must originally have been ‘Polderham’, which meant ‘the village of the marsh’ (cf the Dutch Polder), and can still be found spelt ‘Pouldrum’ in a document of 350 years ago; at that time there were fields to the east of the church, but erosion from the sea has washed this land away, and the river Exe has been widened to its present extent.

There may have been a little Saxon church on the site, but there is no record of it. The first rector was appointed in 1258, and a list of the rectors since that date may be found on the north wall. The church was consecrated by Bishop Walter Bronescombe on 24th November 1259. It is dedicated to St Clement, who was an early Bishop of Rome and the author of several Epistles to the Church of his own time. He was martyred in the reign of the Emperor Trajan (c53-117), and the tradition is that he was drowned in the sea with an anchor fastened to his neck. A fouled anchor is his emblem and appears in the church and also in the corner of the St George’s Cross, which is flown on the tower on special occasions.

The original walls of the church are still standing in the north aisle which is the oldest part of the building. It was restored and rebuilt in the fifteenth century by Sir William Courtenay and his wife Margaret, who erected the nave and south aisle; they were buried in the church, though no trace of their tomb survives.

The door opening into the church from the south porch is very old; the sanctuary ring on the outside of the door is still in its original position. Anyone fleeing from state law officers who could reach and grasp the handle of the ring could claim sanctuary and the right to be tried by ecclesiastical courts. The (repaired) holes in the doors were made by Cromwellian troops under General Fairfax when the church was held and fortified by them for a short space of time during the battles for Powderham in 1645. The position became untenable and they were forced to retreat across the river Exe. A local carpenter of the time made an excellent repair job.

A rood screen ran across the church about the line of the first columns: the door which gave access to the top of it can still be seen in the wall over the vestry door. The lower portion of the present screen, with the old painted panels, probably incorporates the old rood screen; but it had become very dilapidated, and was taken right across the church, and the upper part completed by the generosity of a parishioner in 1881.