Leeds Minster, Leeds, Diocese of West Yorkshire and the Dales 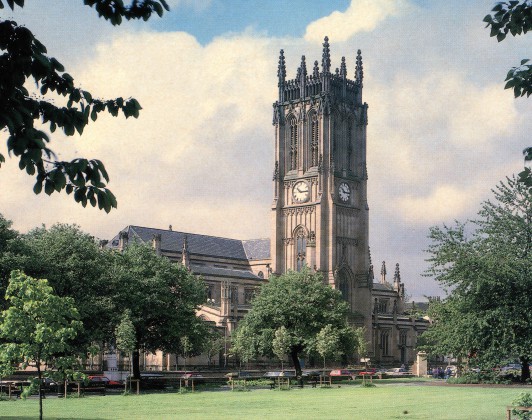 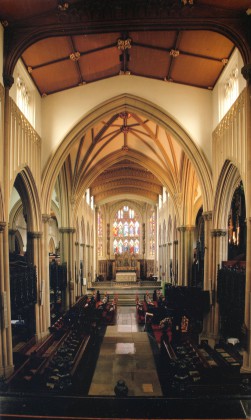 For the army of enthusiasts for Victorian churches, Leeds Minster ought to be high on the list of places to visit. It was, after all, the church that represents the birth of what we now think of as the standard Victorian edifice, ‘the first instance’, according to The Ecclesiologist, of so many features that latter became the norm, and the first great ‘town church’ of the age.

By the start of the nineteenth century, the large medieval church was dilapidated and poorly planned to accommodate the town’s expanding population. On being appointed in 1837, the new vicar, Dr Walter Hook, immediately set about a wholesale restoration and re-arrangement using R.D. Chantrell, the area’s principle ecclesiastical architect. The initial intention was to repair – rebuilding only where necessary – largely keeping the old outer walls, but as work progressed almost nothing of the old structure was deemed salvageable. The result was the biggest new church in England since St Paul’s and a building which, liturgically, both summed up the Georgian tradition and looked forward to the radical ideas emanating from the newly formed Cambridge Camden Society (the Ecclesiologists). Thus the west end still has galleries focused on the centrally-sited pulpit, but the east end has an altar raised on nine steps (3 x 3), a huge ‘altar flat’ to accommodate communicants, and further west, parallel choir pews, built to hold one of the very first surpliced choirs outside the cathedrals.

Hook was determined to have a majestic church with dignified services from which to minister and for the 22 years he spent in Leeds he used it as his base to win back the town from the Nonconformists, ‘the greatest parish priest of the nineteenth century’, claimed his biographer. Remarkably, it has changed little since its consecration: some stunning mosaics by Salviati, a reredos by Street and a font by Butterfield are among very few post-1841 additions. It remains almost entirely as Hook and Chantrell conceived it. Consecration just preceded the Victorian obsessions with ‘honest’ materials and at Leeds Minster the visitor will find near-unique cast-iron pew ends, highly elaborate papier mâché gallery fronts and organ casing, and vaulting of lath and plaster. How else could the rich effect have been produced within budget? Hook and Chantrell would never have believed such innovations – celebrations of the age’s latest technology – would soon come to be ridiculed by the Ecclesiologists.

There is a rare Saxon cross, some outstanding stained glass and several exceptional monuments, from both before and after the rebuilding. It also boasts one of the finest church organs in the country, adeptly manned by two world-class organists, and uniquely for a parish church, choral services six days per week.