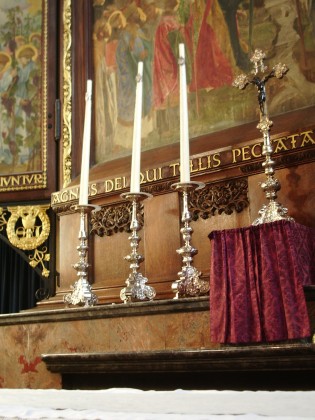 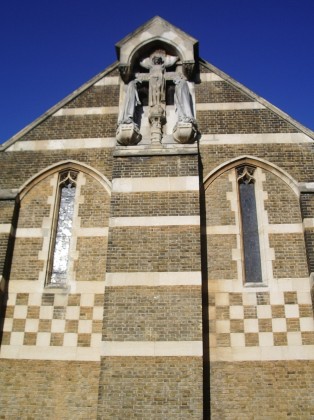 Designed by the early Gothic Revival architect Lewis Vulliamy, it is a fine but much altered example of a Commissioners’ church – economical in design and construction, but distinguished by some delicate ‘Gothick’ features inside and out. The particular significance of the church lies in the reconstruction and major extension of its ‘eastern’ end carried out in 1904-1905 under the direction of designed by Arthur Grove and its enrichment in subsequent years with fittings and furnishings by leading designers, artists and craftsmen of the Arts and Crafts tradition including Nathaniel Westlake; stained glass artists Christopher Whall and Mabel Esplin; Henry Wilson; Eric Gill and Macdonald Gill; Ernest Gimson; William Bainbridge Reynolds; sculptors Richard Garde and A.G. Walker; and painter Dorothy Smirke.

Later works of note include the low-relief Stations of the Cross along the lower aisle walls carved by Freda Skinner who studied sculpture at the Royal College of Art under Henry Moore and Alan Durst.

Major works for the refurbishment and re-planning of the body of the church, the creation of a glazed narthex, the building of a new church-hall attached to the ‘north’ side of the church, and the construction of residential accommodation above the sacristy and vestry were undertaken in 1980-1981, designed by Dry Hastwell Butlin Bicknell, Architects. More recent redecoration of the interior has been undertaken under the direction of the Parish Architect, Peter Bowyer, and the very recent restoration of the reredos in the Lady Chapel undertaken by Howell and Bellion.

For the first forty years of its life, St John’s maintained a distinctly Evangelical tradition, reflected in the very plain, painted pitch-pine, fixed bench-pew seating in the galleries and the body of the church and in the tall, centrally located pulpit and modest ‘eastern’ apse. However, from 1879 onwards the church moved in a distinctly Catholic direction, so that by the early years of the 20th century, it followed a distinctly Anglo-Catholic tradition in its worship and ministry, reflected in the phased enrichment of its interior and in its strong social mission to the local community – still maintained today.