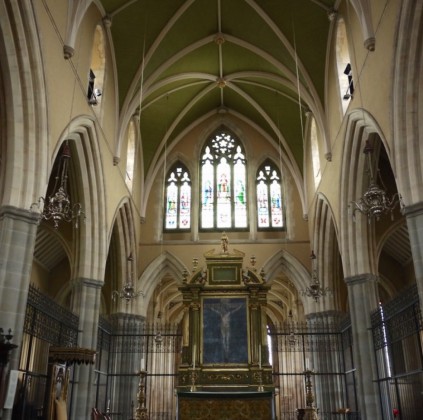 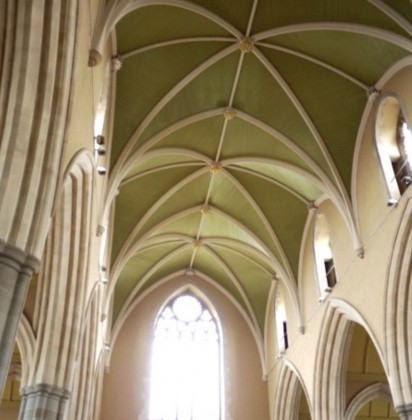 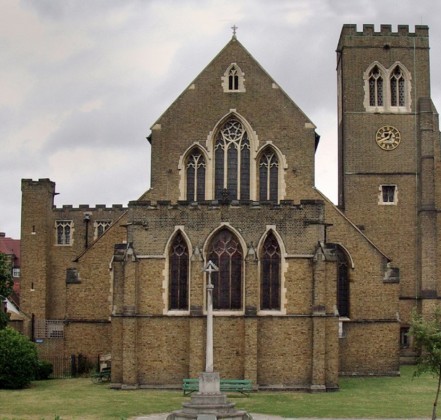 All Saints, built in 1904-6, is one of the greatest of all Edwardian churches. It is a large harmonious building of the late Gothic Revival by Temple Moore (1856-1920) who had been articled to the great George Gilbert Scott junior and who was the master under whom Giles Gilbert Scott (architect of Liverpool’s Anglican cathedral) studied.

The church is the dominant landmark in an unprepossessing middle-class suburb but its origins lie in aristocratic patronage and a strong Anglo-Catholic tradition. It was built under the will of Lady Charles Brudenell-Bruce as a memorial to her husband who had died 1897. The area was chosen in an attempt to bring beauty and true religion to a developing part of London. Lord Charles, youngest son of the Marquis of Ailesbury, had been a close friend of the wealthy Rev. John Otter Stephens for whom Moore had already carried out work in Lincolnshire and it was Stephens who no doubt put Moore forward to design the building.

By the end of the nineteenth century the ornate, florid, richly coloured churches of the mid-Victorian period were a thing of the past. All Saints has an entirely different aesthetic, one which relies, as one commentator on Moore’s work said, ‘on good proportion and sweetness of line’. Outside, the building is faced with yellow stock brick, a most popular material in south London suburbs, but inside the starkness of the brick is replaced by soft-coloured rendering while subtle tonal variations are introduced into the piers and arches through the use of natural stones.

Moore uses double aisles with slender piers which give a great sense of spaciousness. The nave looks forward to the chancel which has a typical and rather splendid Moore feature, a ‘divided’ east window set high up with a 2-3-2 configuration, something that is very beautiful but was rarely used in medieval buildings (except, for example, at Dunblane Cathedral and a few churches in Germany). Beyond is a Lady Chapel, glimpsed through the arches either side of the reredos.

Unfortunately, in the end there was a huge falling out between Moore and Stephens. Stephens had assembled a collection of Renaissance pieces during his travels abroad and wanted to install them in his new church. They were not to Moore’s Gothic taste and the architect protested that the altarpiece would block the uninterrupted view of the windows in the Lady Chapel. Moore duly resigned and it fell to Walter Tapper to install the offending items. However, to the modern eye Stephens’ look well and exemplify the great diversity of architecture and fittings in our churches and the interior is a magnificent experience.

The church is normally locked but you can visit by calling 020 8672 3706 or email: email@allsaintstooting.org.uk