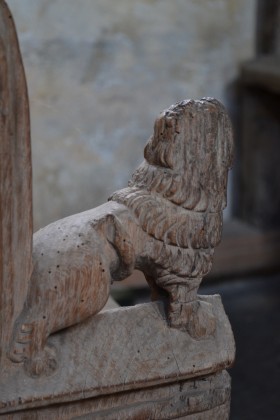 I visited this church only last month as part of a project I am currently working on. A grade II* church, it is currently on the Historic England Heritage at Risk Register. However, thanks to an Heritage Lottery Fund grant, scaffolding has now gone up around the tower and works to the stonework and rainwater goods should be completed by Autumn 2015.

All Saints stands on a low hill and the tower can be seen from most parts of the small village. It is mainly perpendicular in style, built during the first half of the 15th century, though the chancel walls and the arches to the north and south of the chancel may be 14th century or earlier. One unusual feature which I have never seen before is that the porch window tracery is of brick, whereas in most brick porches it is of stone.

The church was restored in the late 19th century by Gilbert Scott who designed the nave roof and organ chamber, but its general appearance today is as it was to the Howards, the ancestors of the Dukes of Norfolk, who were the Lords of the Manor at East Winch while the present church was being built.

The church retains a wonderful peaceful ambiance, slightly dark and fusty but it feels cared for. There are also several wonderful items inside of which I would pick out two.

The font cover was designed by Sir Ninian Comper and is a decorated with a combination of gilding, blue and white is typical of his work.

In the south aisle are a set of 15th century pews which they would have been installed when the church was built. They were originally carved with poppy heads, lion like animals and the occasional eagle.  Greatly need of restoration, and tantalising, as in most cases, all that remains of the carvings on the arm rests are the haunches or paws of some once proud beast.