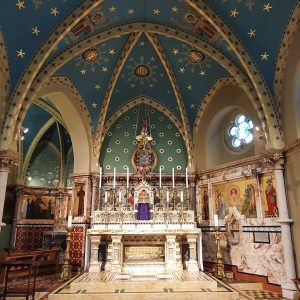 The two churches are:

The guided visits will be led by Peter Howell, the authority on Bentley and whose monograph about him was published in 2020: John Francis Bentley, Architect of Westminster Cathedral, Liverpool University Press, May 2020, https://www.liverpooluniversitypress.co.uk/books/isbn/9781789621990/

We will meet at St Francis of Assisi at 5.45pm and spend about an hour there and then walk to St Mary’s of the Angels, (which according to Google maps will take about 18 minutes).

Bentley’s first work consisted of highly accomplished additions to St Francis of Assisi, Pottery Lane, Notting Hill, a church by Henry Clutton of 1859-60. Bentley had been his assistant and his addition of the Lady Chapel, porch and baptistry in 1862-3 benefited both the church and Bentley himself, for, following his conversion to Roman Catholicism in 1862, he was the first person to be baptised there. We shall also view the superb restoration of this Grade II* listed church, recently completed under Fr Gerard Skinner.

St Mary of the Angels, Moorhouse Road, Bayswater, also has fine work by Bentley. Begun by Thomas Meyer in 1851-2 in Puginian Gothic and completed by Clutton in 1857, it was built as a mission church for Irish Catholic labourers building nearby Paddington Station. Bentley greatly enhanced it between 1864 and 1889, adding an outer north aisle (1869), as well as a similar south aisle and Lady Chapel in 1872. Listed Grade II in 1970.